Steven Sinofsky, The President of Microsoft’s Windows division, gave a peek at what Windows 8 will look like. This sneak peek gives some ideas that how the future version of the most popular desktop OS will be. It will be interesting to see, how Microsoft predicts the user’s habits and expectations about Windows. Currently Windows 7 is a huge success unlike Windows Vista, can Microsoft take the user’s expectation to the next level or it will be the another blunder like Vista? But one thing is pretty sure; Microsoft will try its level best to give users what they want.

After the launch of first video about Windows 8 features by Jensen Harris – Microsoft Director of Program Management, it is clear Windows 8 will never look like its earlier versions. Desktop, taskbar are gone for good now, it is looking like Windows Phone 7 style- system tiles. It is a great concept of giving users a new experience, after several years when people are really fond of it. There’s always an air of anxiety before the launch of a next generation OS platform, here are 10 things you need to know about your MS Windows 8 – 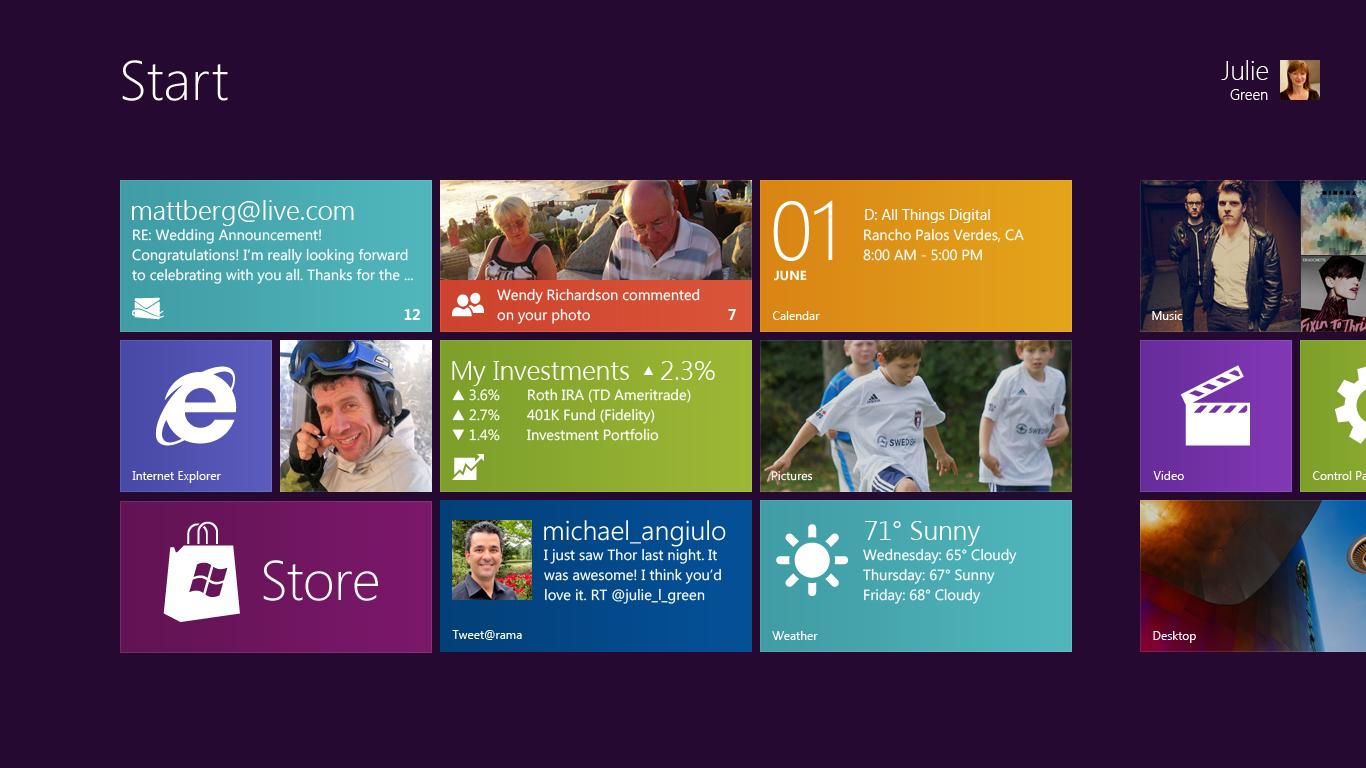 Don’t worry about your older applications running on current Windows, they all will be fully compatible with Windows 8, whether they may look uglier but will work fine in OS for sure. This will be a great relief for laptop and tablet users who need not to upgrade their configuration and setting to work with Windows 8. Wise step by Microsoft, not leaving current users at the sake of new technology.

According to Microsoft, Windows 8 after release will be the most touch capable OS in the market for its features. This is the most coveted feature, which was desired by the most of the tablet and laptop users, or All-in-One PC with touch capability will be the best choice for everyone after the release of Windows 8. According to Harris, traditional Keyboards and mice are on their way out. In Windows 8, online keyboard will be the most loveable feature for typing experts. But about that Harris explains that Windows 8 is for User ease, you can select apps and program with swipe on multi-touch gesture screen.

This time Microsoft brings the desktop and tablet versions of Windows closer to its Windows Phone 7, with that it rest the rumors about the Windows 8 architecture and its build support. This means Microsoft is planning to release Windows 8 on a system-on-a-chip architecture which will support desktop and tablet pc as well. But in true sense can it be implemented? Nobody is pretty sure about that but Harris’s video says that.

A new interface to run your apps in Windows 8. With support of multi-tasking, Metro UI will provide your apps a new experience. But again there is a doubt about this feature too, While seeing Windows 8 promotional video, we saw only one app was is running visualize mode but when Harris turned on the other app and highlighted it the previous app disappeared, There must be a background running support for the other apps while one app is running in the foreground. Just wait and watch for the other update about Windows 8.

As it is stated earlier in this article that Windows 8 has an all new look unlike previous versions of Windows having Tile look instead of desktop and taskbar, but the best part is you can toggle this Windows 8 UI with the older Windows 7 UI. So if you are not comfortable with the new look of Windows 8 you can switch back to Windows 7 UI any time without changing in the performance and features. Cool isn’t it?

Windows native apps will now be web supportive, means user doesn’t need to open an application to get the information about it; all the apps will support the HTML5 and JavaScript to pull the information through the web within a part of second. These technologies make sense to use in this concept because all the information coming to the users are in the form of emails, tweeter feed etc. But there is one thing which is in the back – how Microsoft developed these apps whether with the Silverlight or with WPF? How knows it?

It’s a huge or I must say the best step taken by Microsoft to compete with its rival in brave manner. Windows 8 will feature its own App Store, from where user can purchase and download applications for Windows 8 like Apple Store. There were lots of rumors about this app store by Microsoft, which gets finish after this announcement, me too waiting for this eagerly.

Windows 8 will continue Aero Snap feature of Windows 7 as it is, this might be tricky for Windows lovers who hates Aero Snap. But in Metro UI sense, Aero Snap plays a better role than of Windows 7; here it is included for its requirement to handle multiple apps at once. Because touch screen gesture it will be easier toggling between apps with Aero Snap. So good to continue it in Windows 8.

Microsoft is introducing all new Metro UI with LiveTile Support for your apps leaving behind its conventional desktop and taskbar look, but in the worst case, it may cost Microsoft a lot in terms of reputation because Microsoft is replacing its most famous UI which has its own space between Windows users, it is under question mark that would all the Windows users love to leave older UI for the new one? And if a third party option is available to hide the current Metro UI and users accepts it then Windows 8 will be nothing but another Windows Me.

According to this video, Windows 8 will be completely different from other OS and their UI but we all need to keep this in mind all these features mentioned above are subjected to change or may be available only in tablet version. These are the only first perspectives from Microsoft; a lot of things are yet to come in the September’s developer’s conference, so keep your eyes on news updates from Microsoft.