Motorola Defy Pro was recently announced by Motorola which is water resistant and runs on Android version 2.3 Gingerbread. With a 2.7 inch display, it is the first phone to be released by Motorola which has QWERTY keypad and is dust-proof and water resistant. Defy, Defy XT, Defy Mini were also water-resistant but the Defy Series mobiles have got some serious battery life issues and also slow software update.

This device comes with Corning Gorilla Glass display which protects the screen from getting scratches and smudges on it. This means that the device has got a sturdy chassis and if the phone by mistake gets dropped down in water or even on land there physical damage done to it and will work normally. 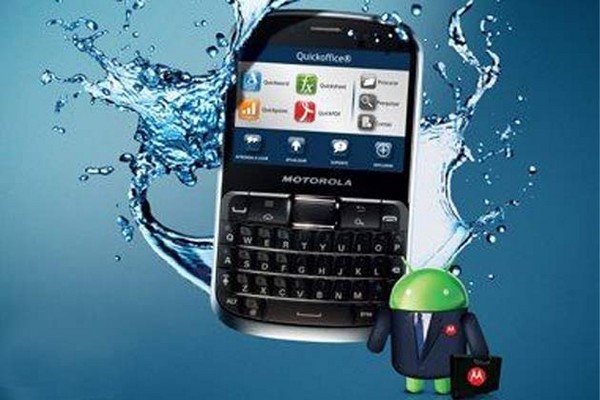 Powered with 2.7 inches capacitive touchscreen display, the phone comes with Adreno 200 graphics chip for better graphics and has a single core process that is Qualcomm Snapdragon S1 MSM7227A while the Motorola Atrix HD has got powerful Dual Core processor. The users interface has been looked into by Motorola and it has Motorola Blur user interface which is really amazing.

The screen is slightly smaller and the company has focused to provide users with full QWERTY keypad for better chatting and typing experience. With 4 row keyboard, the mobile has got a big space key which can be easily noticed if you look at the image below. The shape of the mobile is rectangle with corners curved making it easy and convenient for the users to hold it.

The camera 5 mega pixel camera does a pretty good job. The camera captures decent pictures and has full auto focus and LED flash light which means that you can capture brighter pictures in the evening also. 720p HD video can be recorded by the camera and are very much clear.

Looking at the specs described above the phone is a good choice for those who want a decent performance phone and travel a lot. This mobile is a perfect choice for road-side warriors who travel a lot and will get an advantage to them as the phone is long lasting and doesn’t easily breaks off on dropping down.

There is a micro SD expandable slot up to 32 GB which is missing in many costly mobiles like Xperia U and etc. The phone is priced at $250 that is around Rs. 13,500 only. With a decent price tag, the mobile also comes with QuickOffice application pre-installed by which you can edit your Spreadsheet, power point, excel and Microsoft Word on your mobile itself.

There is also a unique feature called MotoPrint, in which you can directly send a document to the MotoPrint supported printers and print your documents. Other functions like micro USB connection, Wi Fi, DLNA and Bluetooth connectivity which lets them stay up-to-date with what’s going in the world.

The phone runs on Android as told above and many apps comes pre-installed in it like Google Maps, Google Drive, Google Navigation, Google Mail, Google Talk, Google Calendar, Google + and Google Play Store through which you can download any app whether it be a game or an app. It gives you access to around 5,00,000 apps and games available on Google Play Store.

It can give a tough competition to competitors like Samsung Galaxy Ace and HTC Desire C if it comes with Android version 4.0 Ice Cream Sandwich which will give a boost to its user interface and will reduce battery drainage.
The phone has already launched in Brazil and people there can buy it from nearby store. But there is no news about when the phone is going to release in other country. So if you are planning to buy Motorola Defy Pro then you will have to wait a bit.

This post has been written by Shubham who writes about Android OS Rooting and Updating Firmware at thedroidblog.com. He is an avid tech writer and blogger who loves to write on mobiles like Galaxy Nexus S 4G and other technology stuff.