Barely a year after he had provided technology company Apple Inc. with its first product (then known as the Apple Computer, but retroactively known as Apple I) Steve Wozniak was already thinking of a follow-up. The company’s co-founder envisioned a computer that would be faster, more powerful, and better looking than its immediate predecessor. And that computer would be the Apple II.

Designed by Wozniak and marketed by Apple co-founder Steve Jobs, theApple II made its debut at the first West Coast Computer Faire, which took place in April of 1977. (In retrospect, many experts point to this event as the birth of the personal computer industry.) By then, courtesy of art director Rob Janoff, Apple had its logo: an apple with a bite out of it. Jobs added rainbow stripes on the logo to symbolize the color capabilities of the Apple II, something that was lacking on the original computer. Apple II was released for commercial sale on June 10, 1977. The price tag was $1,298 for the 4KB version and $2,638 for the 48KB configuration. 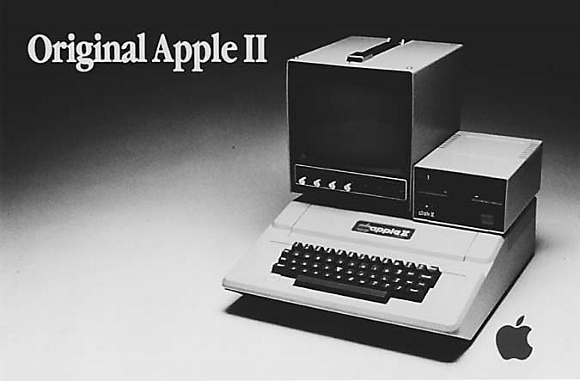 The original Apple II model consisted of a hard plastic case (a precedent in computer technology at that point), built-in keyboard, 5 ½-inch floppy disk drive, and eight expansion slots for enabling the connection of a variety of peripherals or accessories. Unlike the Apple I, this computer could produce hi-res and low-res color graphics, as well as sound with its built-in speaker. Running on an operating system with Integer BASIC built into the ROM, the Apple II came with a 1 MHz MOS Technology 6502 microprocessor, 4KB of RAM (expandable to 48KB), and an audio cassette interface for users to load programs and store data. Although the computer was designed for a wide market range, VisiCalc—an electronic spreadsheet that predated Microsoft Excel—made the Apple II particularly popular with business owners.

Exactly two years later, in 1979, the Apple II became a series of computers with the introduction of the Apple II Plus. Improvements on the second iteration included boosted graphics and disk-booting support in the ROM. During this time, Apple Inc. renamed the programming language Applesoft BASIC. Also, the company began selling the computer in Europe and Japan—as the Apple II Europlus and the Apple II J-Plus, respectively. The Apple IIe arrived in 1983, a lower-cost computer with more enhancements, including the display of upper and lowercase letters and standard 64KB of RAM (expandable to 1MB).

The introduction of Apple III in 1980 almost spelled the end of Apple II; the computer’s would-be successor suffered from stability issues and would be discontinued in April of 1984. The Apple Macintosh had debuted three months earlier, and even though Apple II was very popular, the Mac would eventually eclipse it with superior technology by the end of the 1980s. However, the Apple II would enjoy nine more years of production. Subsequent models included the Apple IIc, Apple IIGS, and Apple IIcPlus. By 1993, when Apple finally pulled the plug on the computer, the platform sported a 16-bit processor, interior power supply, smaller disk drive, mouse-driven Graphical User Interface, and memory, graphics, and audio capabilities that far exceeded that of the original.

Apple’s current personal computers directly trace their bloodlines to the Macintosh. However, it is the Apple II computer that laid the groundwork for the Mac era to thrive. In a very real sense, it was the natural stepping stone toward greater and more complex computer models (including non-desktops and tablets such as the kensington ipad air). The Apple II was the first widely used computer in America’s education system, and it is credited with helping ignite the home computer revolution of the 1980s and 1990s.

Derek Trufant is a freelance writer based in Little Rock, Arkansas specializing in technology topics, including antique computers, tablets, smartphones, software and others as well.