As the smartphone war is on, there are top 6 mobile operating systems which are trying to capture most of the market. Android showed immense market spread power by Google’s marketing strategy giving Apple’s iOS a sneak shot. Samsung, with Android showed unbelievable 300% growth in mobile market, made it second in the league after Apple in year 2010. With this success, Korea tries to make a step further by supporting Samsung for developing its own mobile operating system – BADA. On the other hand Nokia just launched Lumia 800 and 710 featuring Windows Phone 7.5 Mango. Today, we are presenting a little bit overview on the top 6 mobile operating systems which capture the most of the smart phone market. 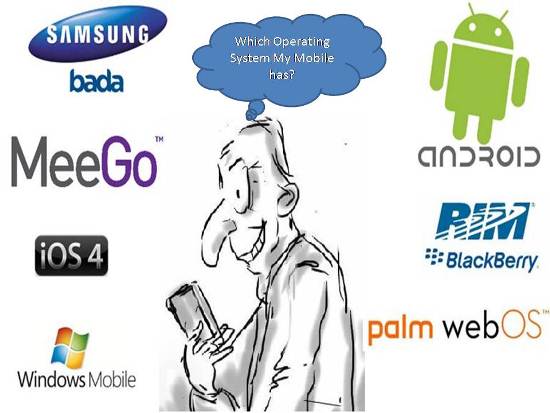 The birth of the iOS, formerly iPhone OS, dates back to 2007. At the time it was launched, Nokia with its Symbian OS and BlackBerry OS were the reigning kings of the smart phone market. The initial version of the OS was quite simplistic, lacking even copy-paste functionality. The OS was originally developed for the iPhone, but later on further developed as a platform for all Apple devices except the iMac. The OS started picking up speed at an exponential rate and almost single handedly ousted Nokia from its top spot in the smart phone market by the time iOS4 was out.

The features it introduced were quite revolutionary at the time, but with the advent of the open source Android OS and growing threat from Microsoft with its Mango update, iOS 4 started to look old very fast. Finally, Apple announced its iOS 5 update for iPhone, iTouch and iPad. The upgrade, while absolutely huge in terms of features was, again, mostly essential updates and just enough to keep the OS at the same level as its competition. iOS 5 did bring along some very interesting features such as air-play mirroring, an improved browser, support for cloud to set the standard for OSes in its heyday, but at the rate which OSes are evolving, the iOS is now struggling to keep up.

Android is a comparatively new entrant in the smart phone OS arena, but has risen to popularity at such a rapid rate that it has acquired almost half the smartphone market share in the world. The comparatively rapid update cycle meant that despite a rocky start, the OS now sets the norms as far as the mobile OS is concerned. Android has gained a lot of popularity and has completely dethroned Nokia and is slowly eating its way into Apple’s, previously untouchable, market share. Now with the release of Android 4.0, the OS is packed to the brim with every feature you can think off, flash support, apps, NFC, threaded messaging, tethering, face recognition and many more.

The v4.0 upgrade is supposed to be a merger of Honeycomb and Gingerbread. The upgrade does not seem like anything much when compared to the iOS 5 or Windows Mango updates, but this is because the OS already had most of those features integrated to begin with. This OS is here to stay and is only getting better with time.

Microsoft has been making mobile operating systems for almost 10 years now. The interface then looked more like a simplified version of Windows Desktop OS. Windows Mobile underwent a slow evolution, but it wasn’t till WM6 and further updates that the OS actually acknowledged the fact that a touchscreen needed something more than a stylus. The interface underwent a serious overhaul, and started incorporating a text based UI. Finally, in 2010, Microsoft launched the completely revamped Windows Mobile OS as Windows Phone 7. The interface was very unique list-based metro ‘design language’. That and the introduction of live tiles set the OS apart from its brethren. The initial WP7 OS was an aesthetically pleasing, but essentially crippled OS, not even having the ability to set custom ring tones. It took 2 major updates NODO and Mango to bring the OS up to speed with the current generation platforms.

Nokia and Symbian shared a very rich heritage for a long period of time with Nokia Symbian 60 devices being literally synonymous with smartphones. Nokia later bought Symbian OS in 2008 and started developing S60v5 as Symbian. A variant of S60v5, the primary upgrade to the OS was the integration of the UI into the OS itself, which resulted in an increase in performance. By this time of course, the iPhone and Android had launched and Symbian has desperately been trying to play catch-up ever since. The current update, Belle, introduced re-sizeable, live, widgets and notifications in the lock screen, NFC and numerous UI tweaks. The interface is also quite zippy and the browsers that supports flash natively. The future of this OS is still dicey though, Nokia recently has switched to Windows Phone 7.5 Mango.

The ubiquitous businessman’s smartphone, BlackBerry did to email what apple did to music. BlackBerry tightly integrated its OS with its devices and tries to ensure quality push email services no matter what. Now, with almost every service that a BlackBerry provides available on most smartphones, BB is rapidly losing market share. BB OS has always been a very good, reliable and secure OS, but was never much of a multimedia device. The recently announced BBX OS update will completely revamp the BB as a device. It will run on the QNX platform which means that will not be backward compatible with OS7 devices. The OS7 update brings with it an upgraded graphics engine, voice activated search as well as NFC and a much better browser and HD video recording.

BADA is a Linux based OS developed by Samsung for, as they put it, ‘a smartphone for everyone’. It was in 2010 that Samsung announced their first BADA 1.0 powered device. When the OS was first launched, it was a very basic OS with just the bare essential features to classify it as a smartphone. With the upgrade to BADA 2.0, the OS is right up there with all the big guns of the smartphone listed above. The update brings with it speech recognition, multitasking, a full-fledged web browser with flash support, NFC, Push notifications and many more. The app marketplace has also slowly been growing and now includes over 7,000 apps. Samsung has announced plans to make this OS open source and to also integrate it into their upcoming Smart TV as well. Overall, this OS does have a lot of potential. How the public receives it remains to be seen.

I am Samith Jhon a content writer and a Professional Blogger. I am certified with 1Z0-533 Test which is very popular these days and have a great scope in the field of IT Certification. I always like to take 1Z0-516 Test to pass the Tests. These kinds of Test questions could secure your future as well as your job.