Everywhere we see, Samsung is making a mark and giving the competition a run for its money. Powered by Android, the Operating System from the house of Google and great processors to ensure faster response and great performance, Samsung is providing users endless options when it comes to smart devices and gadgets. Not only do they score on performance, the gadgets also steal the customer’s heart with the well priced devices. 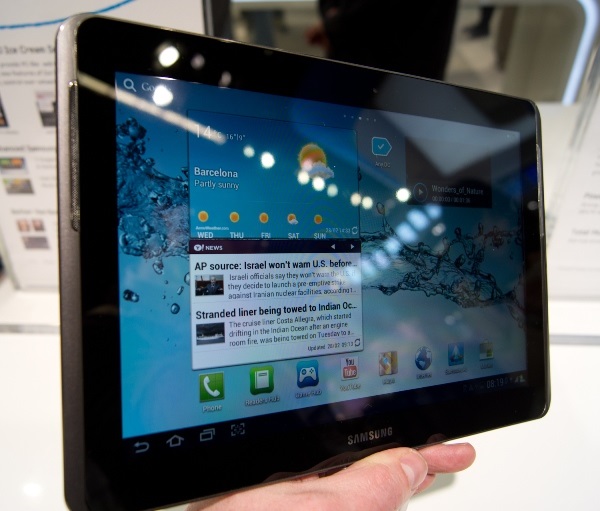 Display: Galaxy Tab 2 has a PLS Liquid Crystal Display (LCD) capacitive touch screen and offers a display of 16M colors like many of the gadgets from the house of Samsung. It has a 7-Inch screen with a pixel size of 600 X 1024.

Features: It is available in the market with operating systems of Android version 4.0.2 (Ice-cream sandwich) but is upgradeable to Jellybean, which makes it a preferred choice.

It comes with sensors for compass, proximity, gyro and accelerometer.

It comes with a GPS and GLONASS.

Allows for data usage via GPRS and edge with a speed of 21 MBPS for HSDPA and 5.76 MBPS for HSUPA.

Camera: The primary camera in TAB 2 is 3.15 mega pixels with a screen resolution of 2048 x 1536 pixels. The camera allows for GEO-tagging and has smile detection sensors. It also has a video feature of 720P@30FPS.

Storage: The tab 2 comes with 1 GB RAM. It has storage of 8, 16 and 32 GB. It also has a micro SD card slot for expandable memory of up to 32 GB. If one expands the memory even on 8 GB tab, it has enough space for a person to use and store ample data without any worries.

Battery: It comes with a non-removable Lithium-Ion 4000 mAH battery with a standby time of 1190 hours on 2G usage and 1080 hours on 3G data usage. The talk time is 40 hours with 2G and only 20 hours with 3G usages. The battery backup with a phone like the note is great.

Processor: Note 2 has a dual core processor with a speed of 1Ghz and chip set is TI OMAP 4430 and has a GPU of power VR SGX540 working on 1 GB RAM.

Price: Priced at Rs.15999, it is a steal for its price. One can buy the phone and upgrade it to the latest software version. The speed, performance and display of the phone is at par with the competition.

Pros and Cons: It has great 7-inch display screen, with a great speed processor and an HD recording option. It offers great battery life, faster response and highly effective touch screen, and great looks. It however fails to impress because of camera performance, which is only 3MP, and with an LED flash. It is a bit heavy to carry and not easy to slide into one’s pocket to carry around. It heats up a lot during continuous normal usage.

Verdict: Note 2 tablet phone is the best in the market for its effective pricing. It offers a whole range of features and is easily upgradeable. Performance, looks and display are great and the weight is not a problem if the features are great and applications run in a trouble free manner.

Finding a very good phone is not so difficult now-a-days. Online in the best way to get the best deals on gadgets. There are so many classified sites, wiju.com being one of them. You can find any products such as smartphones, tablets, brand new as well as second hand. Galaxy tab II is also listed there. Grab it today, hurry!