There are many fonts available to use in graphic designing and making beautiful logo, then what is the need to modify a font? Sometimes your clients request such thing which may be a little bit pain in your bum, their desire may tend to your creativity expire. It’s not easy to get desirable fonts all the time and without cost. So it would be better if you’re able to edit font itself using Adobe Illustrator or the same capable application. In this article we will give you step by step guide to do so.

Originally this tutorials has been written in the computer art magazine, you can see the picture here and follow the steps given below to achieve the same result at your end.

Time needed: 30mins (depends on how you use application)

If you have the Gotham ‘Light’ typeface, create a new document and type out the words ‘computer arts’ at 50pt and then right click and click ‘Create Outlines’. You will also find the rest of the Gotham Light typeface if you wish to create a different logo after the tutorial. Take a moment to study the changes we are going to make, as circled in red. 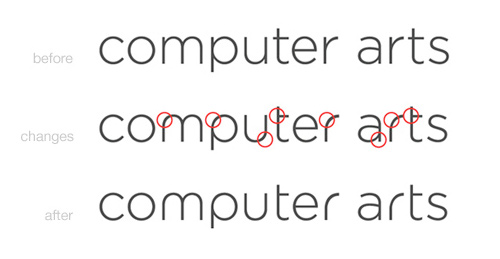 You will notice the text is now editable; this is because we have outlined the font. This allows us to edit the letterforms. Now that the text is outlined the first thing you will want to do is make a duplicate of the words. Hold down alt and drag a new copy out. After duplicating, right click on the text and click ‘Ungroup’. This allows us to edit each letterform individually rather than all at once. 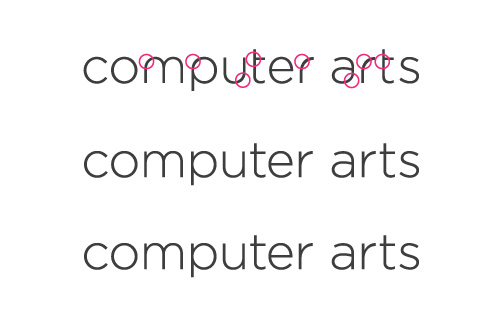 Zoom into the top of the ascender of the letter M at 6400%. Select the letter M and then select the delete anchor point tool by clicking the minus button (-) on your keyboard. Delete the top right anchor point of the M’s ascender. This will leave a sharp point. Zoom out, turn on smart guides and then put a ruler in line as shown. Take note that the ruler is directly inline with the anchor point on the middle of the M. Use the direct selection tool (from now on called DST) and pull down the left side of the M to in line where you made the rule. Hold down shift to ensure it is locked to a straight line. 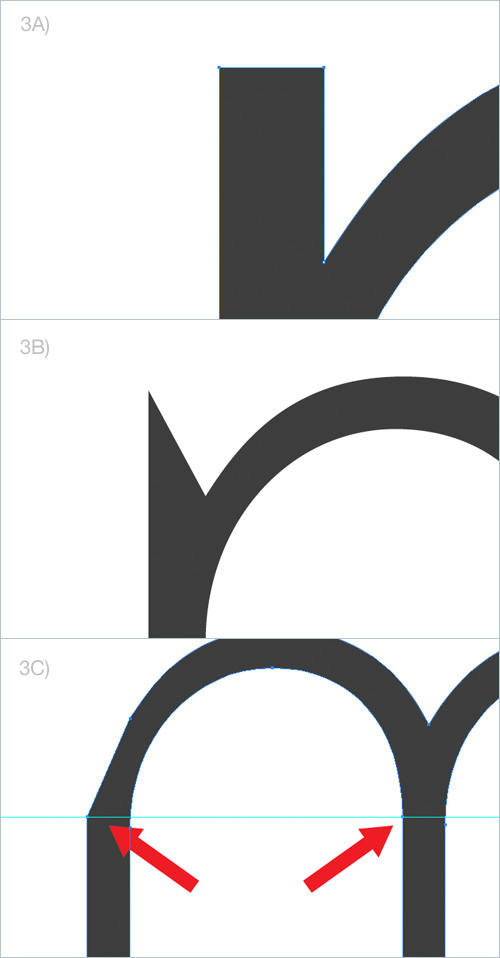 Select the delete anchor point tool again and delete the anchor point on top of the M as shown by the arrow. Now grab the DST again, click once on the very top anchor point of the M. This will show two blue nodes. Grab the left one and pull it out to the left so it is inline with the vertical edge of the M, remembering to hold down shift while doing so. A pink smart guide should show you where to lock it into place. Let go and now the letter m is complete. 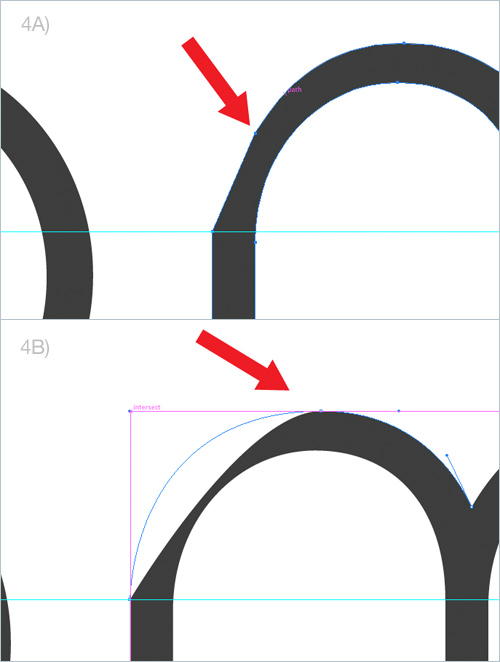 Now zoom into the letter P. This is going to be similar process… deleting the top right corner of the p’s ascender. Create a new ruler and put it in line with the middle of the P as shown, taking note that this is a different spot to the first rule. (You may want to delete the other guide so you do not confuse yourself). Now get the DST and drag the left side of the P down to inline with the rule you just created. Now delete the middle anchor point of the P. With the DST select the top anchor point and pull out the left blue node to the side of the P, just like we did for the M. 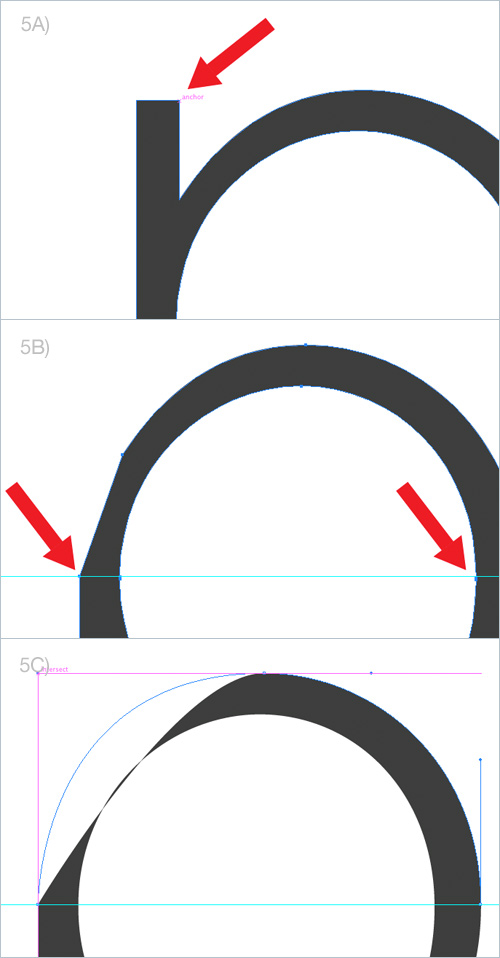 The letter U will be using the same technique, just in reverse. Delete the left anchor point of the descended. Create a rule in line with the bottom anchor point found on the other side of the U. Get the DST and move the point up to where you created the line. Delete the middle anchor point like you have done for the M and P. Get the DST and click the bottom middle anchor point, drag out the right node to in line with the right side of the U. The U is now complete. Use this same technique for the letter A. 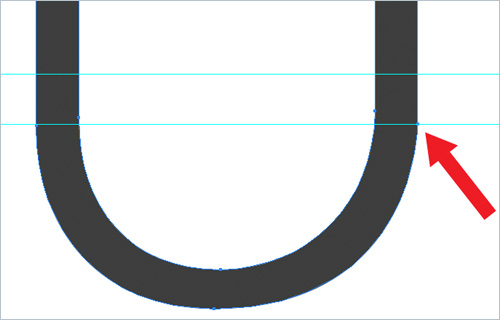 Now zoom into the letter T. Use the delete anchor point tool (-) and delete the two anchor points found on the left side of the T. You will notice that it leaves two other unneeded anchor points on the middle stem of the letter T. It’s good practice to optimize your files, both for file size and faster printing, so delete these too. Do this all again for the second letter T. Don’t worry about kerning just yet. 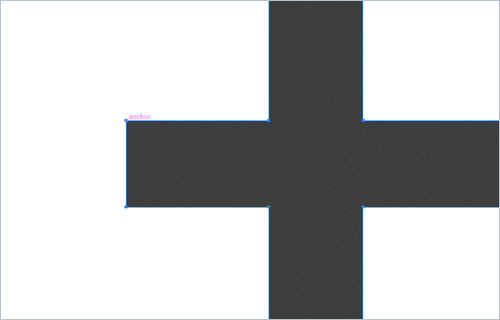 Zoom into the letter R. The letter R is going to be using the same technique as the M and P however take note of where the ruler is located this time, this time it is in line with the bottom of the E. After you have done the letter R, duplicate it and drag it over to the other R and place it directly on top of the other R. Delete the R with the ascender. All of the letters have now been modified. From here you can kern as much as you desire. 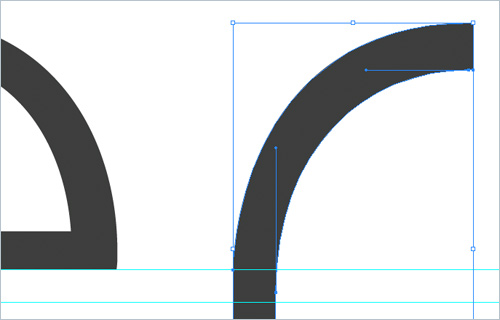 Now that you have the customized type, you can experiment further by adding new elements such as the ‘CA’ provided, tweaking nodes, changing the layout, sizing, color, etc. to create a unique brand identity. Shown in the image above are just some of many possible variations. 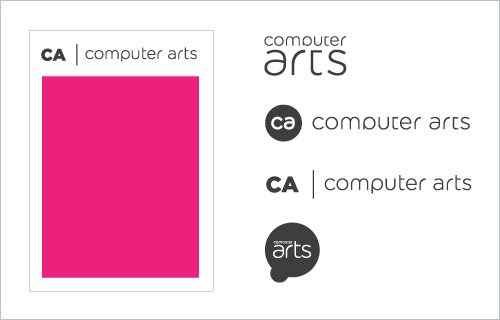 This tutorial was written by Jacob Cass at JUST™ Creative.