Tuesday night came along just as it always does each and every week. You got home and got into something comfortable, readying yourself to relax and recline in front the big screen TV for the rest of evening. You most probably popped some microwave popcorn and sat down on the couch, reaching for the remote and hoping to take your mind off the events of your day. Naturally, you expected your regular prime time network television lineup on Tuesday night. Nope. Cougar Town surprised you, and not in a good way. You may not have realized it, but Cougar Town switched channels. As of early 2013, in order to watch Cougar Town now, the Courtney Cox-led sitcom’s fans will have to tune in to TBS instead of ABC. 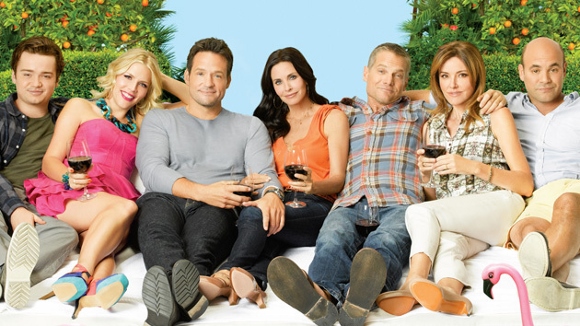 After spending its initial three seasons on ABC, Cougar Town switched to TBS for its fourth season. The cable network TBS negotiated for 15 episodes for season four of Cougar Town and encore rights to the shows first three seasons that had previously aired on ABC. The switch to another network was almost like déjà vu for the show’s creator Bill Lawrence who had undergone a similar experience with the sitcom Scrubs switching from NBC to ABC in its final season.
Part of the reason for Cougar Town’s popularity has to do with its creator and cast. Lawrence created Scrubs and serves as the creator and co-producer of Cougar Town, lending his comedic and creative talent to the show. Courtney Cox stars as the lead, a 40-year old, single woman. Cougar Town is Cox’s long-awaited return to TV comedy after her long term stint on Friends.

Even in Hollywood, the networks wage war with one another for top-rated television programming that attracts audiences and generates ad revenue through commercial sponsors. While still airing on ABC, Cougar Town’s competition spanned beyond the other major television networks to include subscription based cable networks like HBO and Showtime. Additionally, reality TV rose in popularity on other cable networks during the show’s early years, drawing millions of viewers evening after evening and increasing the level of competition for viewers.

In its first season the show began with a wellspring of audience numbers amid the fierce competition for viewers on network television. Taking an initial introductory and strategic position, following behind the popular ABC sitcom Modern Family, it was still a major win for the network as it gained viewers who wanted to watch Cougar Town. In 2010, the producers of Cougar Town began considering a name change for the sitcom and ABC’s top brass seemed to be on board with the move since the show had strayed from its original premise. The rumors and buzz of a potential name change loomed in the blogosphere and social media networks. Nevertheless, the title for the show never changed and the show lives on as a TBS network show.

If you really loved to watch Cougar Town, you don’t have anything to fear. The show is in good hands with TBS, a popular cable network that continues to expand its programming. By airing the original 61 episodes as reruns along with the fourth season, TBS will most probably leverage the current audience while seeking to attract a new set of viewers to both Cougar Town and the network itself. The move to TBS seems more like a marriage than a move from one network to another since TBS sought the rights to the previously aired seasons as well.

Cougar Town has found itself the recipient of a criticism from reviewers, however. Many critics found the show’s title to limit its audience attractiveness to older female viewers, driving the male television viewing audience away with its title and its story line. However, despite all of the negative speculation from critics, the show has done quite well with the male and young adult audiences across all demographics according to TVbytheNumbers.com in 2010.

The real test will be whether the switch to TBS will allow the sitcom to expand its reach and still maintain its broad audience appeal.

Devoted fans of the Florida-based sitcom and its colorful cast of characters can still watch Cougar Town. In fact, with the recent switch from ABC to TBS, you can not only watch Cougar Town but you can also catch up on the episodes that you have missed since the show initially aired in 2009.