It seems that literally everybody and anybody have fallen in love with the Android Ice Cream Sandwich, otherwise known as Android 4.0. This is the latest version of the Android platform which is available to all those with an Android smart phone, tablet or any other electronic good using the Android system.

Many Windows users were left reeling with jealousy when they laid their eyes on the Android Ice Cream Sandwich because it was something that they wanted for their desktop. Luckily, an extremely clever man who goes by the name of David Molina found a way to bring the popular and well-loved Android 4.0 Ice Cream Sandwich to Windows 7 desktops as well. 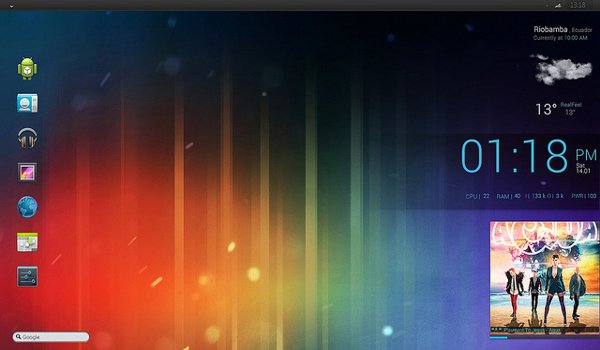 Nevertheless, before the article reveals just how to do this it is important to keep in mind that a high speed internet connection will be needed as a lot of components and files will be getting downloaded in order to secure the Android Ice Cream Sandwich. There are some great sites that cover off high speed internet fairly well, thus it is crucial to ensure that one looks around for the best deals available to them.

So what do people need to download in order to turn their Windows 7 desktop into an Ice Cream Android Sandwich treat?

Obviously, if one wants their windows desktop to look exactly like that of the Android Ice Cream Sandwich desktop then they will need to download the identical wallpaper. This can be found online and is one of the most important components in this list. After all, the Android’s impressive design is one of the main reasons as to why it is so popular.

Rainmeter is a free open software system which is used to customize and configure Windows’ desktops. It allows people to edit their desktop through the utilization of different skins so that they are faced with a desktop which is completely customized to their wants and needs. It is an open source software which is available free of charge. A lot of the following components will actually need Rainmeter in order to work.

RocketDock is a free application which needs to be downloaded in order to create a replica version of the dock which can be found on the left hand side of the Android 4.0 Ice Cream Sandwich desktop screen.

The Minimal Bar Skin needs to be downloaded. It is a skin which is designed for Rainmeter. However, this should be something which has already been downloaded, as it is component two on the list. The Minimal Bar Skin is vital because it will be used in order to display the date and the time on the desktop.

Google Search Bar for Rainmeter needs to be downloaded as well in order to ensure that this tool is present and usable.

The APPOWS 2012 theme is a Windows 7 theme which needs to be downloaded, preferably from Deviant Art. This is a component which is highly important as it will be used in order to make changes to the taskbar.

This component can be downloaded from Droid Pirate. The Ice Cream Sandwich Icon Pack comes complete with the 17 custom icons that can be found on the Android 4.0 platform.

This package is vital in order to get the same font as the Android system, the Roboto Light font is what people should be aiming for.

The Lexis Skin is another download which needs to be used in conjunction with Rainmeter. This component is used in order to display the weather.

Simplesentencethree is one which needs to be suited for Rainmeter as well. It is used to play music and should be set up in the bottom right hand corner of the desktop screen.

So, there are the ten components needed to turn a Windows 7 desktop into an Android Ice Cream Sandwich treat. Remember, a strong internet connection is needed to download these and there are some great sites that cover off high speed internet fairly well so make an effort to search around.